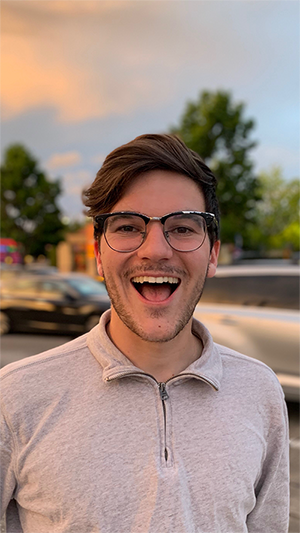 Johndavid Lancaster, a Bartlesville, Oklahoma native, was named the Electrical Engineering Outstanding Senior for 2021 at the University of Arkansas. Lancaster was a BHS graduate in 2017 and participated in a ConocoPhillips internship during his senior year at BHS as part of the school's internship program. He received both a Service League Scholarship and a Sean David Conover Memorial Scholarship when he graduated from BHS to assist with his higher education.

Each year, one electrical engineering senior is selected as the department's outstanding senior based on their academic achievements and involvement with the department.

Lancaster has taken many leadership roles during his time at the U of A. He's also worked on several hands-on projects with university researchers.

His interest in the field of electrical engineering began in high school when family members mentioned that he might want to be an engineer one day.

"I honestly didn't know what an engineer was, so I googled it, and just kind of picked a type of engineering that I thought I would like and decided that I might major in that one day."

Lancaster said he had no idea what it even meant to be an engineer. That all changed when he was given the opportunity to intern at ConocoPhillips in this hometown.

"During my time, my manager knew that I wasn't completely sure which field of engineering that I wanted to pursue, and he encouraged me to explore the company and talk to different engineers to get a sense of what they did on a day-to-day basis," he said. "I spoke to engineers in many different disciplines and researched the career paths that you could take by majoring in each of them. After talking to several electrical engineers, I realized that I was by far the most interested in that discipline of engineering."

He also realized that he wanted to be a part of the new innovations in computing and consumer electronics.

"I knew I wanted to help create some of this world-changing technology one day," Lancaster said.

Lancaster chose the U of A after visiting the campus. The beautiful campus was a big factor in his decision to attend the U of A, but he also received scholarships that made it possible for him to attend, which he greatly appreciates.

"I loved all the nature on campus and loved Fayetteville as a city," he said. "I honestly feel like I've grown up with the (electrical engineering) department," he said. "Over the course of my time with the department, my course work taught me many hard skills that were important for me to learn."

He's also learned how to solve problems while cultivating his natural curiosity.

"This natural curiosity means that I ask many questions and really like to understand a problem, solution or system," Lancaster said. "During my time here, I have also gained many soft skills that have been very beneficial for me to have in the workforce."

These soft skills include leadership and teamwork opportunities.

"While here at the University of Arkansas, Johndavid never saw an idea he didn't do something about. From outreach at the Bartlesville Library to energizing the Electrical Engineering Student body — Johndavid was always doing something to make a difference," he said.

Lancaster graduated this spring and will work at IBM research as a hardware artificial intelligence engineer in Yorktown Heights, New York.